Amongst the numerous Punjabi patriots that have been borne over centuries, arguably, Sardar Bhagat Singh’s personality stands as the tallest in stature, fame, and sacrifice. However, a strange event occurred after the death of this son of Punjab. The land that he called his mother got divided into two parts. This partition not only divided land but also mentalities, families and heroes. A strong sense of ‘us’ and ‘them’ were forged, to invoke patriotism, justifying the partition, or the betrayal, fueling nationalism. What is Indian is anti-Pakistani and vice-versa.

In this division of history, where does Bhagat Singh stand? He was an Indian when he died, but can he become a Pakistani after Pakistan, based on his ancestral village. Logic has it that he should become an Indian like Allama Iqbal became a Pakistani. We know that Bhagat Singh was an atheist. Can Pakistanis even dare to own atheist heroes? Now that is a path I am frightened to tread on.

Atheist or not, Muslim or Sikh, these distinctions cannot undermine the intellect, the passion and the sacrifice of Bhagat Singh. Irrespective of which country owns Bhagat Singh, the fact of the matter is that he was born in a small village on the Jaranwala-Faislabad road, called Banga, now part of Pakistan. He spent most of his adult life in Lahore. His political struggle was launched from this city; he murdered J.P Saunders in this city. His trial took place here and he was finally hanged in Lahore, on the 23rd of March 1931.

The struggle of Bhagat Singh was not for the Muslims, or the Sikhs of India, as, ironically, the Khalsa movement, later, tried to portray. He fought for the repressed, irrespective of the religion. His best friends were Muslims; at least they were, before they became atheists. Like Che Guevara, Malcolm X, and Nelson Mandela, he is a symbol of empowerment, to the oppressed, yet I don’t understand why, whereas, a lot of people in Pak-land appreciate the efforts of the former turn red when Bhagat Singh is mentioned.

From 20th to 25th of November 2008, the fifth Punjabi Lokh Mela was organized and celebrated at the Government College of Jaranwala. This is an annual affair, and each year a Punjabi hero is celebrated. This year was the 100th birthday of Bhagat Singh, because of which the Mela was arranged at Jaranwala, close to the birth village of Bhagat Singh. My mother and I along with some of our friends went to the see the Mela, on the 23rd of November 2008. Our expectations were high; imaginations shaped by a large amount of Indian movies and dramas we have seen. But we were disappointed. The previous night three token blasts had occurred at the Alhamra Cultural complex, during the Rafi Peer Festival. There were just a few hundred local attendees. After trying our best to fully enjoy ourselves, we left in vain, to our next, much more exciting, stop, the residence of Bhagat Singh.

At a few kilometers from this place, on the right side of the road, if one is going from Jaranwala, a broken road leads to the forgotten village of Banga, where once songs about the bravery of Bhagat Singh were sung.

After suffering tremendously on the road, we reached Banga in one piece. The road, made of mud, was perpetually uneven. At the residence of Bhagat Singh we were greeted by Advocate Sanaullah, as if he was already expecting us. His family settled here after the partition. I could not help but appreciate his efforts to preserve the original architecture of the legend. He has not changed the intricate doors that were in vogue during that juncture. He has kept the strong safe that belonged to the family of Bhagat Singh. Perhaps his greatest contribution was the nourishment of the berry tree, whose seeds were laid by Bhagat Singh, himself, according to Sanaullah. Next to the tree was one of the original doors from that time. He told us that on the frame of the door Vande Matram was written, in blue ink, now no longer present.

The original house was an area of 2 canals, now divided into five houses, according to Sanaullah. Most of the original structures of those times have been eliminated. Just one room, within the property of the advocate, in a depredated state is still extant. It was reported to be the drawing room of the family. It was now below the present surface of the house.

Following this we headed towards the school where Bhagat Singh studied. Facing the school was an open ground, where, once, children from the school used to play. Now it is a playing field for bacteria found in the stagnant water. Behind the pond was a tall tower of a mosque, which was once a Gurduwara, according to Iqbal Qaiser. This was, primarily, a Sikh village, with just a few Muslim houses.

The school is in shambles, yet still functional. The primary classroom where Bhagat Singh used to study now exists without walls and roofs. Advocate Sanaullah reported that he is writing desperately to the government to revamp this classroom, but to no avail. He informed that the previous Governor had accepted to preserve the school and the house, and also uplift the village, but then the regime changed. The papers are still with the Governor.

Just as we were leaving the village, I asked a young boy, with no shirt, around 6 years of age, if he knew who Bhagat Singh was, he retorted, with pride, it seemed, Bhagat was the greatest Punjabi warrior.

I was Dean, Faculty of Languages, Panjab University Chandigarh till January 2021 and now Honorary Adviser Bhagat Singh Archives and Resource Centre New Delhi. After I retired as Professor from Jawaharlal Nehru University New Delhi, I had joined the Central University of Punjab, Bathinda as Professor in Comparative Literature for a year for 2014. In 2016, I was nominated as Fellow to the Senate of Panjab University Chandigarh for four years. My main interest in Bhagat Singh and other revolutionary heroes of India and the world.I write in Hindi, Punjabi and English and can read Urdu as well. My detail bio-data is available on JNU website-jnu.ac.in.My two other blogs are-bhagatsinghstudy.blogspot.com and drchaman.wordpress.com.I write on Twitter and Facebook as well. 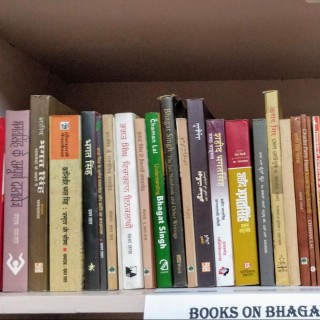 I was Dean, Faculty of Languages, Panjab University Chandigarh till January 2021 and now Honorary Adviser Bhagat Singh Archives and Resource Centre New Delhi. After I retired as Professor from Jawaharlal Nehru University New Delhi, I had joined the Central University of Punjab, Bathinda as Professor in Comparative Literature for a year for 2014. In 2016, I was nominated as Fellow to the Senate of Panjab University Chandigarh for four years. My main interest in Bhagat Singh and other revolutionary heroes of India and the world.I write in Hindi, Punjabi and English and can read Urdu as well. My detail bio-data is available on JNU website-jnu.ac.in.My two other blogs are-bhagatsinghstudy.blogspot.com and drchaman.wordpress.com.I write on Twitter and Facebook as well.

This is a blog to express occasional loud thinking on any issue, occurring to mind. It could be short notes on books I read, films I see, travels I make. I am now adding all the previous notes I undertook and also publications in different journals, the correspodence with writers, everything in my physical written records, would be put here as my literary archives. It may take time to put all records, but I am making a beginning. I will need lot of support from well meaning friends, interms of technical know how, software which can facilitate this big task of putting thousands of pages here for public record. The blog also focuses upon essential unity of mind among people of India,Pakistan, Bangladesh and South Asia in general.This blog stands for the unity of Punjabi culture,irrespective of political and geographical divide and emphasizes upon essential cultural unity.